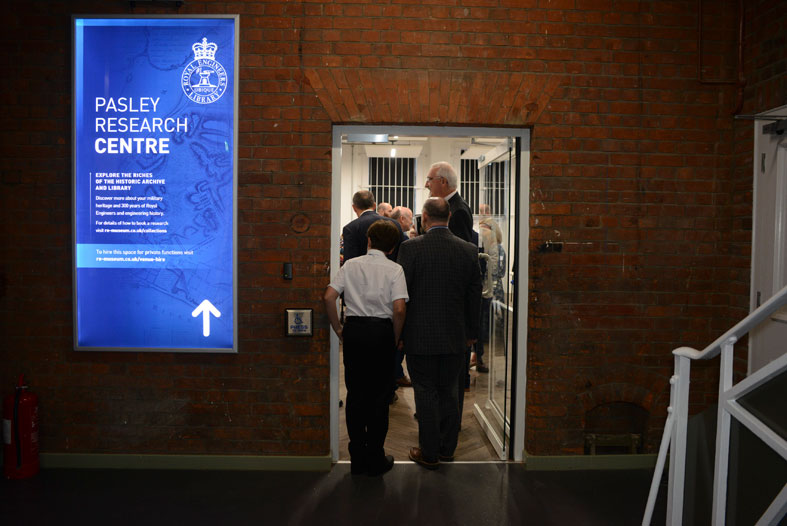 The new space was formally opened by military historian Dan Snow on Thursday 23rd September with guests having the chance to get hands on with archival materials in addition to touring the new centre and temperature controlled archive stores.

Mr Snow commented “Visiting the Royal Engineers Museum has been very enlightening to me and it does what every good museum should do which is place the subject of that museum at the very heart of British and world history. It’s such a remarkable collection here. It is projects like the one we’re here to celebrate opening today that are all about renewing, refreshing and enabling all of us to access those materials, whether it’s the giant armoured vehicles or the yellowing photographs buried deep in the collection. That’s what’s so exciting, we’re not at the end of a journey, it sounds to me like we’re really at the beginning.”

The move of the library and archive to the Museum’s site on Prince Arthur Road was first approved in 2007, and this final project has cost £1.8million with contributions from Royal Engineer Corps Charities, Mid Kent College and private donors. The Royal Engineers Museum’s archive and library collection is a treasure trove of history on over three hundred years of the Corps of Royal Engineers’, military engineering and UK military history. The archive has been largely unknown to researchers and will now be much more accessible to all users.

The Museum is dedicated to supporting researchers and encouraging use of the original source material.

Rebecca Nash, Museum Director, said “We hope to work closely with schools, universities and the military to give students the confidence to use archives and get ‘hands on’ with the wonderful and unique items they hold. Funding this resource truly emphasises the importance that the Royal Engineers Museum and the Corps of Royal Engineers puts on education, understanding the past and its influence on the present and future.”

Equally important is the new storage facility which will ensure the long term care of the collection and allow the Museum to continue to collect material relating to the cotemporary Corps and its work. The Corps Library expanded out of Chatham and by 1863 had 16 UK branches and 19 overseas Libraries.  These Libraries closed as Britain withdrew from its Empire with the books returning to England or being disposed of locally. The Museum is delighted to now have the collection together under one roof and in a space where it can be properly looked after.

Due to high winds, the Museum is closed today (Friday 18th February). Please keep an eye on our website and social media for reopening.

Stay safe and we hope to see you again soon!